Paper packaging has seen a resurgence in recent years, becoming ever more popular with customers and producers alike as its many benefits are realised. This in turn has led to an increase in demand for custom die cutting services as producers look for innovative ways to make their product stand out on the shelf next to their competitors and to save money in the process.

There are a broad range of reasons for this move for paper packaging and die cutting services and an equally broad range of factors that have contributed to the trend. The primary influencing factor has been the increasing demand amongst consumers for green products.

Paper had faded in popularity during the later part of the 20th century as plastic packaging came into vogue. This interesting article from the University of Ohio on the history of packaging outlines the change in a detail.

Everything from deodorant to tuna salad was packaged in plastic containers. By the late 80’s the novelty of plastic packaging had worn off and it began to take on less positive associations.

The public was becoming more and more aware of environmental concerns generally and in particular with plastic products.  There was also the issue of the production process, which typically involves the distillation of fossil fuels.

However, paper as an alternative packaging material did not necessarily appeal on environmental grounds as global deforestation was also coming to the fore of the public’s awareness.

More recently, efforts to create sustainable sources of wood for packaging and other materials have lessened concerns about deforestation. And while plastic manufacturers have made efforts to produce more easily recyclable plastics it is still more energy efficient to recycle paper.

Where plastic containers are typically manufactured using heat moulds or vacuum forming, paper packaging is typically created using some form of die cutter, be that a rotary die or a flatbed die. The increasing demand for paper packaging has resulted in ever greater requirements for custom die cutting services.

As a service, custom die cutting allows manufacturers to have a high degree of control over the form and quality of their product’s packaging. Rotary dies (used in corrugated box manufacture) are somewhat more complex to produce but allow for faster cutting, making them suitable for large runs. Flatbed dies are ideal for shorter runs. 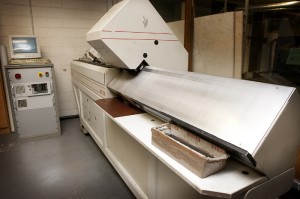 One example of huge growth for paper packaging and by association die-making and die-cutting is “pre-packed sandwiches”. In recent times these have become one of the most popular lunch meals particularly in the UK and Ireland. Last year in the UK over 3 billion premade / prepaked sandwiches were purchased with more than 6 billion spent on them.  As mobile devices and the spread of technology mean that more and more of our work day is spent on the move that figure is only likely to grow. For paper packaging suppliers and die manufacturers that means a lot more sandwiches to package.

Brands are also learning the value of letting their customer know about ethos of the company and their approach to issues such as sustainability and the environment.

With a clever approach to branding and awareness of customer attitudes manufacturers can work with die-makers and die-cutters to better express their brand’s ethos, and remain ‘green’,  through their own packaging.

This entry was posted in Articles. Bookmark the permalink.